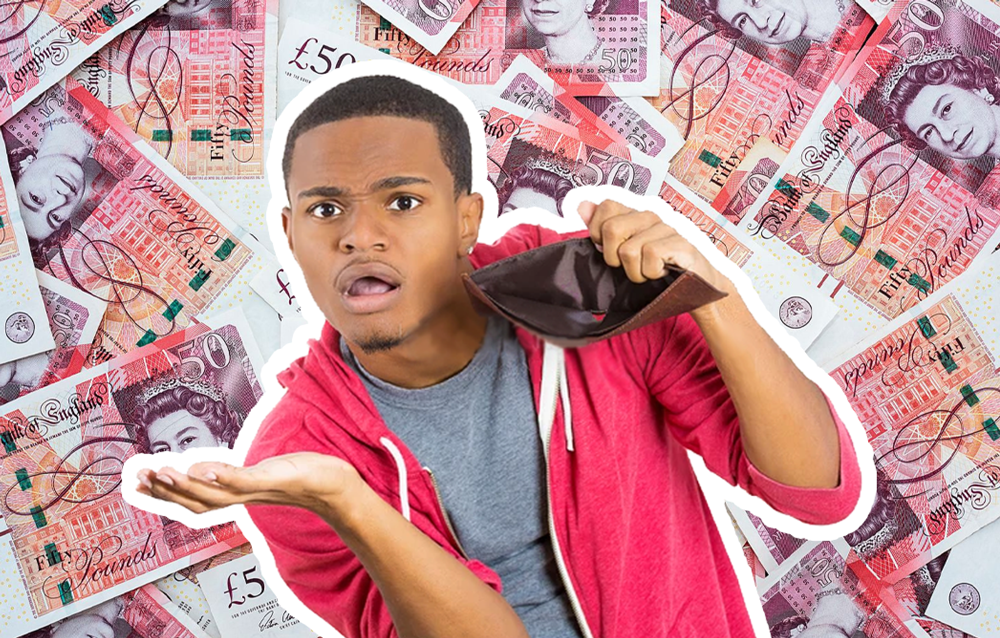 The results for our Finance Survey are here and my oh my, it really does seem like there's a disparity in the finances being provided to students and the costs they're confronted with in their university lives. Over 900 students were surveyed about their finance woes, and the resulting numbers are pretty startling.

Unless you were born into some multimillionaire dynasty - even if your family are considered to be somewhat well-off - you’ve all had to deal with trying any way possible to save money at some point.

Generally speaking, life is expensive and for some reason if you want to live healthily and in a way that’s beneficial for the environment, it only gets more expensive. It’s all very frustrating, and things only get more costly when you’re at university.

Try though you may, your funds seem to dwindle into the square root of nothing all of two days after your loan comes through and then what is it? Pasta from the saucepan and own brand vodka for the rest of the month. Not a huge amount of fun.

Of course, since you’re all students, you’re all clever enough to think up a couple ways of saving a few quid, and the recent Finance Survey we conducted only goes to prove that.

While 74.5% of you believe that you’re generally good with money and managing your funds, only 52.2% of you don’t feel like you’re struggling financially while at university.

Building on that, quite shockingly, only 24.9% of polled students believe that university fees present a good value for money.

So how, as a unit, do you stay on top of common money woes? No two people are the same, but amazingly a huge 41% of you cut your own hair?!

I mean I’ve cut my own hair once and it went about as well as I could have hoped for, but god I’ve seen what can go wrong… and things go very wrong. Are you really prepared to deal with two weeks of a painfully awful fringe just for a night out in Pryzm? Christ knows I’m not.

Conversely, things can get a little more sketchy, with 33.5% of you admitting to pocketing condiments and the like from restaurants to take home. Along with them, 15.9% of you also steal loo roll from uni, the SU, and other public places. Don’t worry, none of you are in trouble…

Less illegally but still frowned upon, more than 30% of you sneak drinks into clubs and bars - which is honestly fair enough, if you ask me - and one of the most common money saving tips to appear when you were prompted to suggest your own, was to “drink at home first”.

Naturally, the concept of pre-drinks is hardly new one and oftentimes, people prefer the pres to the actual night out, but it’s interesting to see just how much drinking and “partying” take precedence with students. We all know that one of the biggest elements of student life is the subsequent nightlife, and that seems to be most of the reason students find themselves in financial difficulties (of course teamed with the exorbitant university fees).

It’s not all fun and games though. Cutting your own hair is, you know, character building, and rather thankfully, only 3% of you admit to minesweeping in nightclubs and bars, but it can be more troubling than that. Explaining the reason for some of their financial woes, one student recounted how with one of their parents unemployed, they had to take out several loans for university and life in general, constantly being dug into a deeper hole. The light at the end tunnel for this particular student appears to be quite a stretch away as well, as they’re very early on in their university stay and they plan on another course immediately afterwards.

Along with that student, there are of course more with their own stories on why and how they’re struggling with money, but an overarching theme appears to be that life in general is too expensive. Some complain that immediately after doing a weekly shop and paying rent, they feel like they have no money left to do anything else. Others cite the lack of jobs available for students, or the lack of pay or time involved with getting one.

It’s true that a lot of the people who are having money issues could save some money by not going out, but why should they? They’re living in a society where it does seem frowned upon to not go to university, while being charged through the nose for it and not being provided with good enough loans with reasonable interest rates.

If you want to see the rest of the results from the Finance Survey, then go on and head over to this lovely link right here! See you there!